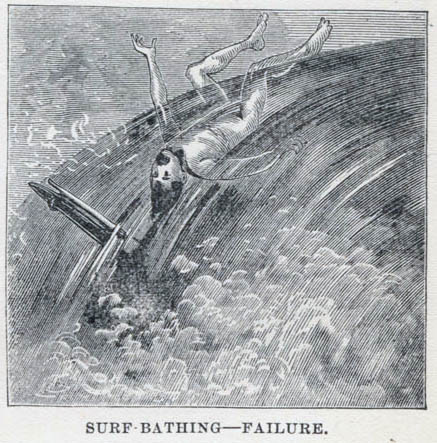 In one place we came upon a large company of naked natives, of both sexes and all ages, amusing themselves with the national pastime of surf-bathing. Each heathen would paddle three or four hundred yards out to sea, (taking a short board with him), then face the shore and wait for a particularly prodigious billow to come along; at the right moment he would fling his board upon its foamy crest and himself upon the board, and here he would come whizzing by like a bombshell! It did not seem that a lightning express train could shoot along at a more hair-lifting speed. I tried surf-bathing once, subsequently, but made a failure of it. I got the board placed right, and at the right moment, too; but missed the connection myself. – The board struck the shore in three quarters of a second, without any cargo, and I struck the bottom about the same time, with a couple of barrels of water in me.

None but natives ever master the art of surf-bathing thoroughly.