Doc Savage has never been as popular in Germany as in the USA or even France. To my knowledge, publication began with the first two Bantam stories in 1966 and 1967. Both appeared in Utopia Zukunftsroman, a weekly magazine publishing foreign (mainly British and American) science fiction material, with the odd German author tossed in for a change. Translations were often garbled, with endings differing substantially from the originals; also, texts were frequently heavily abridged. 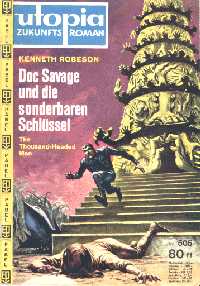 These magazines were the standard format for any sort of popular fiction from the 1930s to the late 1960s. They were sparsely illustrated, if at all, with few letters, but usually an editorial. Science fiction and anything fantastic was in the hands of two publishing houses (who were to merge in the 80s), and the same one who had published Utopia Zukunftsroman launched the classic German edition of Doc Savage late in 1972, which would run for 89 issues and seven years.

I call it the classic edition because it is the only one. And, more important, because it’s the one I grew up with.
I read two or three of them in the early 80s, but wasn’t impressed very much by them at the time. (What did stay in my memory was the film, so it can’t be all bad.) Still, in the early 80s, if you were at all interested in speculative fiction, you could not fail but notice the Doc Savage paperbacks. They were published by Pabel, whose paperbacks one could instantly recognize by their format, type, logo, spine. And since Pabel was one of the major places to look for science fiction, fans would develop an eye for the Pabel look. It was a matter of seconds to scan a row of second-hand books for stuff published by Pabel. Add to that the fact that nobody could forget or overlook the colour of the Doc Savage spines. So while you didn’t have to like or read Doc Savage, you would always notice the books.

Publication was four-weekly, with 13 issues per year. The books are translations of the Bantam editions. Chapters are numbered but do not get individual titles. Covers are taken from the Bantam editions, exceptions are noted. None of them are credited. Occasionally, the covers have been altered slightly (mostly reversed), usually the borders got chopped off a bit, sometimes they got mixed up; details can be found in the list below. Kenneth Robeson is always given as the author, translators are fairly stable but change over the years. The plot synopsis is usually, but not always, a direct translation of the Bantam synopsis.

The number of pages varies within certain limits only, which leads me to suspect that texts were again abridged to fit the allotted number of pages.
For that reason I have included in the list the number of all pages of text, including 1/1‑page ads (the first to appear im #24). I suppose that the overall number of pages was set (though it varied over the years), and texts were either abridged to make room for ads, or ads were put in to fill up the pages (less likely, in my opinion).
Individual prices begin at 2,80 DM in 1972 and end at 3,80 DM in 1979.
The Pabel paperbacks were magazines, strictly speaking. They did not have an ISBN number and could not be ordered from a bookshop – or bought in most of them, for that matter. It was off to the newsagent if you wanted your fix.

The table includes the German series number, the Bantam number, original title, translator, date of publication and the number of pages (minus the number of full-page ads). Information is as taken from the books; I have tried to point out when any information given in the books is incorrect.